I made some stuff

After I got done feeling bad about wrecking a bunch of my hive’s comb, I thought “Ooh! Beeswax!”

I had already watched a couple of videos on processing comb into wax, and clearly did not have enough comb to melt it through a pillowcase for filtering (it would all have just soaked into the pillowcase). Instead, I tossed it into a small disposable baking tin with some water and set it on the stove. It melted easily enough, but all the schmutz (pollen and some leaves) was still in there, so I ran it all through a coffee filter. Some wax stuck to the filter, but conveniently, wax does not seem to stick to wet paper, so I was able to pull it right off.

Anyhow, after filtering it, I was left with a nice little block of beeswax (about 25ml worth). I found a recipe online for a beeswax wood polish, which was just four parts oil to one part beeswax, by volume. The author of the recipe used jojoba oil, but I didn’t have quite enough jojoba, so I used a combination of jojoba and sweet almond oil.

I measured out four parts oil and one part beeswax (I used water displacement in a measuring cup to find the volume of the wax), and put it all in a jar, which I then set in a pan of water on the stove. After a few minutes, it started to melt, and after about 10, the wax was completely melted.

The recipe warned that you need to stir the cooling mixture every so often to keep it all mixed properly (apparently, the wax and oil separate if you don’t), so I stirred it well every 15-20 minutes, and finally ended up with a nice creamy beeswax/oil paste. I also added a few drops of lemongrass oil for smell. 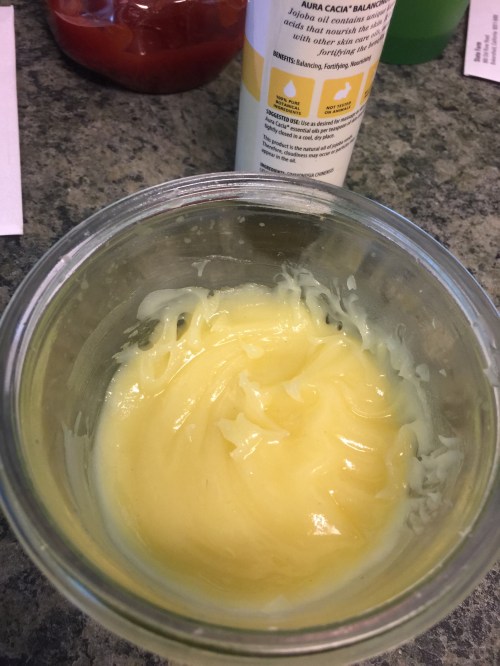 I applied some to a small wooden cutting board that has been needing oiling for a long time, and it looks fantastic. Darkened up the wood and water now beads right off of it.

Success! I’m considering rubbing some on my Clark’s Desert Boots (though, I should really get them resoled first). And basically everything else I can find.